HTC (HTC) and Microsoft held a conference in New York to jointly launch two Windows Phone 8S and Windows Phone 8X smartphones based on the Windows Phone 8 (WP8) operating system. Both smart phones will be available in early November of this year, and prices have not been announced. Subsequently, Nokia criticized HTC for rebranding, and Nokia is really developing around the WP system. Another WP camp mobile phone maker Samsung did not comment.

Although HTC did a great job of designing 8X and 8S, the software experience of these two phones is not very good. HTC confirmed that apart from the LiveTile on the home screen, HTC did not provide customized applications and content for these phones. Nokia has launched a series of specialized applications, including Nokia Music and Nokia Transport.

HTC chose to release a new WP8 machine in the near future, obviously to reverse the recent poor performance. HTC forecasted the third quarter revenue at the beginning of this month, and estimated that the total revenue in the third quarter of 2012 will be US$2.34 billion to US$2.7 billion (70 billion to NT$80 billion), and the gross profit margin will be the In the second quarter, 27% fell to 25%, and operating profit margin also fell from 9% to 7%.

Second, Microsoft high-profile support cited Nokia dissatisfaction at the HTC conference, there is a detail that must be mentioned. Prior to participating in the Nokia WP8 mobile phone conference, Microsoft CEO Steve Ballmer only came to power until the end, and to participate in the HTC conference, he was on stage from beginning to end, the industry believes that this detail seems to reflect Microsoft's different mindset for different vendors in the WP8 camp. Some analysts have pointed out that in order to obtain more vendor support, Microsoft will certainly not give Nokia special support. This is in line with Google's acquisition of Motorola Mobile, it still stressed many times that it will treat all Android vendors equally.

Microsoft's high-profile support also attracted Nokia's dissatisfaction. In addition, because HTC8X and Nokia Lumia820 look very similar, there are sources that Nokia will sue HTC for this issue, the news pointed out that Nokia is ready to apply for the ban on HTC8X.

After the conference, Chris Weber, Nokiaâ€™s executive vice president of sales and marketing, posted on Twitter, saying: â€œWe have introduced features like PureView, Nav, and wireless charging, not just changing the phone name. If you want to match Lumia 920, then It's not just about matching colors.â€ He hinted that HTC's phones lack innovation.

The current WP8 camp has a number of smart phones such as Samsung Ativ, Nokia Lumia 920 and 820, HTC8X and 8S. Perhaps from Microsoft's point of view, if Nokia still maintains a slow pace of development, Microsoft will at least have Samsung, HTC, and other vendors to take on the responsibility.

Third, the accidental winner WP camp continues to grow Apple and Samsung's patent litigation, making Microsoft an unexpected winner. In the An-droid camp, first HTC, followed by Samsung, Apple is using its patented stick to defeat the Android camp one by one, this way, many manufacturers began to turn to the WP camp.

Recently, Lu Qianhao, head of market strategy at ZTE Corporation, posted a picture of three ambiguous new WPs on Weibo, including ZTETania with a WP8 system and a tablet PC with Win-dowsRT.

Huawei will also release two WP8 products in the near future. The Ascend W1 is taking the low-end route. The second Ascend W2 is a flagship product that competes with Nokia Lumia 920 and HTC 8X.

A few days ago, cool vice president of research and development Zhang Guangqiang said: "Cool is also preparing for smart phones based on the WP platform, is expected to debut in the first half of next year." This is in 2009 after abandoning the Windows CE platform, Cool again using Microsoft's mobile operating system .

The industry also reminded consumers that with the emergence of new waves of WP8 and the emergence of Apple's iPhone5, the smart phone market in the fourth quarter of this year will definitely allow consumers to have a wider range of choices. Users who want to change machines may wish to wait and see.

In addition, the world's major operators are also behind the WP8. Verizon, the largest wireless operator in the United States, confirmed that it will launch several WP smart phones in the fourth quarter of this year. Telco operators AT&T and Verizon Wireless have stated that they support the third smart machine platform, which has brought about the development and expansion of the WP system. Opportunity.


OEM needs smaller and more diverse packaging options to meet product design challenges and maintain cost competitiveness in their respective markets. Ball grid array (BGA) packaging is becoming more and more popular to meet these design requirements. In addition, they are ideal solutions, because I/O connections are located inside the device, increasing the ratio of pins to PCB area. In addition, BGA with strong solder balls is stronger than QFP lead, so it is more robust.

At present, the standard used to accommodate various advanced and multifaceted semiconductor devices (such as FPGA and microprocessor) is encapsulated by ball grid array (BGA) devices.

In order to keep up with the technological progress of chip manufacturers, BGA software packages for embedded design have made remarkable progress in the past few years.

This special type of packaging can be decomposed into standard BGA and micro BGA.


With today's electronics technology, the demand for I/O availability poses a number of challenges, even for experienced PCB designers, due to multiple exit routes.

Correct BGA partitioning first takes into account uniformity of the partitioning, itself. Because, precise BGA partitioning on a PCB is a crucial design aspect to minimize or eliminate crosstalk and noise, as well as manufacturing issues.

Memory signals need special consideration during BGA partitioning. They need to be away from oscillating signals and power supply switching. This is important because memory signals needs to be clean. If traces carrying these signals are in the proximity of oscillating signals or switching power supply signals, they produce ripples in the memory signal traces, thereby reducing system speed. The system is operational, but at less than optimal speed levels.

Another question is how many layers the PCB layout should have, which is by no means a simple decision. More layers mean higher overall cost of the product. On the other hand, sometimes you need more layers to suppress the amount of noise PCB may encounter.

Many designers call it dog bones. It is a short path of the BGA device pad, with a through-hole at the other end. The dog bone fan comes out and divides the equipment into four parts. This allows the remaining internal padding to be accessed by another layer and provides escape paths away from the edge of the device. This process will continue until all mats are fully developed. 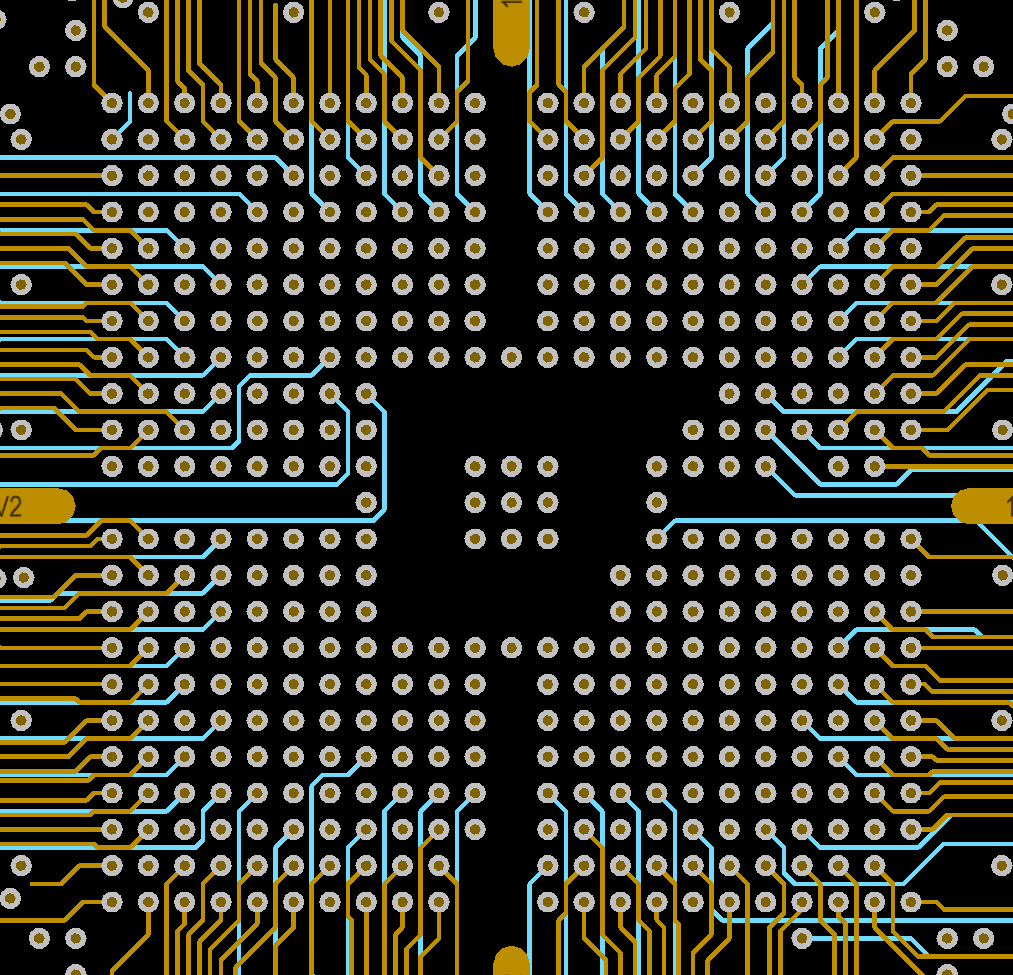 Designing BGA is not easy. It requires many design rule checks (DRCs) to ensure that all traces are properly spaced and carefully studied to determine how many layers are needed to make the design successful. As technology continues to grow rapidly, so does the challenge faced by every designer, introducing design into a very narrow space.


There are six different BGA packages.

4. Tape Ball Grid Array (TBGA): You can use this BGA package as a solution for medium- to high- end applications.

5. Package on Package (PoP): It will permit you to put a memory device on some base device.

6. Micro BGA: This BGA package is quite small when compared with standard BGA packages. Currently, you will see 0.65, 0.75 and 0.8 mm pitch size dominating in the industry.


Previously, Engineers were not sure whether PCB BGA assembly would be able to achieve the reliability level of traditional SMT methods. However, at present, this is no longer a problem, because BGA has been widely used in Prototype PCB assembly and mass production PCB assembly.

You will need to use reflow methods to solder a BGA package. Because only reflux method can ensure solder melting under BGA module.

We have a wealth of experience handling all types of BGAs, including DSBGA and other Complex Components, from micro BGAs (2mmX3mm) to large size BGAs (45 mm); from ceramic BGAs to plastic BGAs. We are capable of placing minimum 0.4 mm pitch BGAs on your PCB.


With PCB BGA, you will get the following advantages:

1.   BGA package eliminates the issue of developing small packages for ICs with lots of pins.

2.   Again, when compared with packages with legs, The BGA package has a lower thermal resistance when placed on the PCB.

3.   Do you know which property causes unwanted signals distortion in high-speed electronic circuits? The unwanted inductance in an electrical conductor is responsible for this phenomenon. However, BGAs have very little distance between PCB and the package which in turn leads to lower lead inductance. Thus, you will get top-class electrical performance with pinned devices.

4.   With BGAs, you can effectively utilize your Printed Circuit Board space.

5.   Another advantage that will come with BGA is the reduced thickness of the package.

6.   Last but not least, you will get enhanced re-workability because of bigger pad sizes. 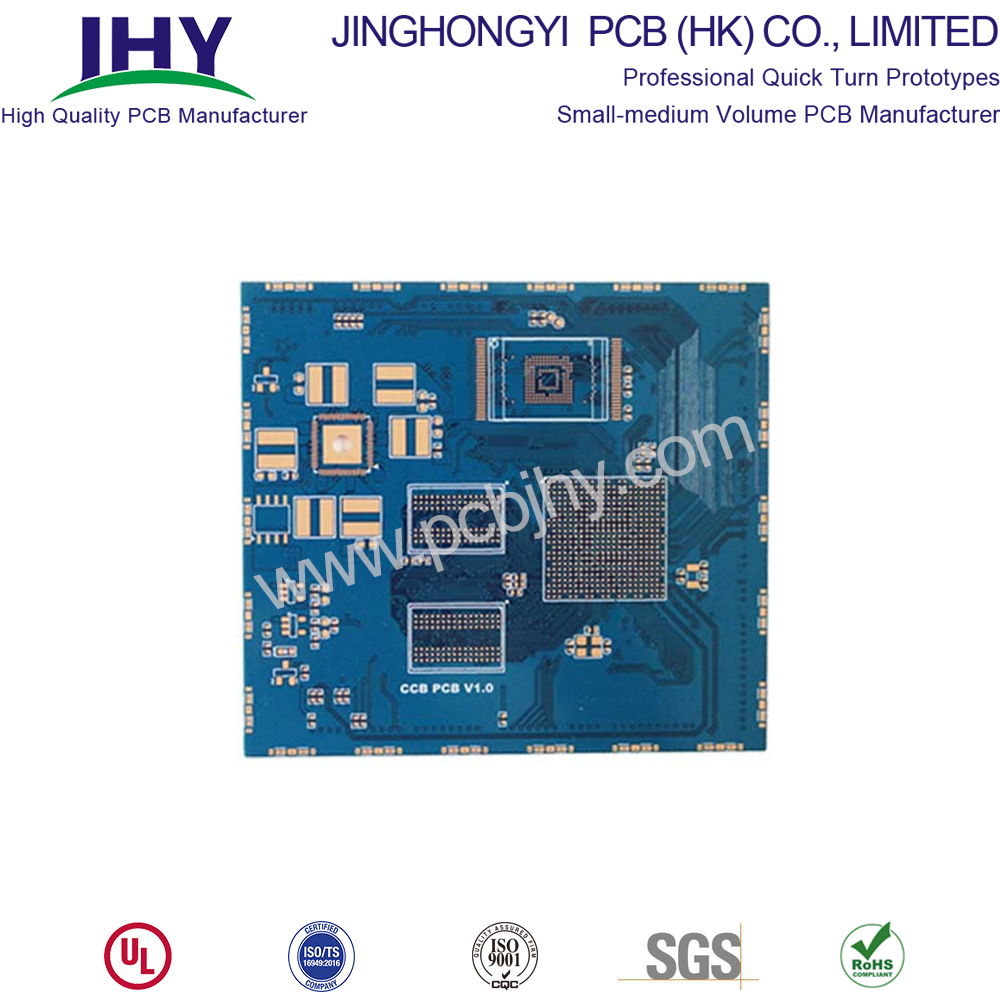