Multiple input multiple output (MIMO) technology is considered to be one of the key technologies of next-generation wireless communication. This article mainly discusses closed-loop MIMO technology that can further increase the capacity of multi-antenna systems, that is, MIMO system with feedback. The feedback channel information can not only improve the transmission performance of a single link, but also optimize the scheduling problem among multiple users. We present several closed-loop MIMO schemes that may be used in future wireless communication systems, including SVD decomposition and codebook-based precoding techniques, and analyze and compare their performance. Simulation results show that closed-loop MIMO technology will effectively improve the performance of the communication system.

Multiple input and multiple output (MIMO) technology using multiple transmit and receive antennas is one of the key technologies for next-generation wireless communication. It can effectively utilize random fading and possible multipath propagation to increase the transmission rate. Both 3G-LTE and WiMAX systems have adopted MIMO technology to improve their performance. IEEE802.16e and WCDMA products have already realized the functions of MIMO system.

The transmitters of the above two schemes do not need channel information (CSI), which is called open loop MIMO system. In situations where the channel changes slowly, such as indoor environments in large cities and nomadic access services, closed-loop MIMO systems can further improve system performance. In the closed-loop MIMO system, the receiving end feeds back channel information to the transmitting end, and then performs precoding, beamforming, or antenna selection on the transmission data. The feedback method of closed-loop MIMO can be divided into full feedback and partial feedback. Full feedback is to feed back all channel information to the transmitter. Since the feedback link takes up system overhead, in actual systems, partial feedback techniques are generally used. For example, the statistical characteristic value of the feedback channel, the SVD decomposition value, the codeword number based on the codebook, etc., to achieve a trade-off between performance and complexity.

This article mainly discusses closed-loop MIMO technology. We give typical precoding schemes based on SVD decomposition and codebooks, and then compare their complexity and performance. Finally, they give simulation results and discuss their applications in next-generation wireless communication networks.

As shown in Figure 1, a MIMO system model with Nt transmit antennas and Nr receive antennas can be expressed as:

If the transmitter knows the information of channel H, the channel can be pre-coded (beamforming) to obtain better transmission performance. The channel information can be obtained by feedback from the receiving end or sending the training sequence to the transmitting end. This is a closed-loop MIMO system, and its general structure is shown in Figure 2

In the actual communication system, the feedback channel information will occupy more resources, and in the fast fading channel, the efficiency and accuracy of the feedback information are relatively high. At this time, the partial feedback method is more appropriate. The most typical partial feedback schemes include: codebook-based precoding, statistics-based precoding, etc. After receiving the training sequence, the receiving end searches for the best precoding matrix from a series of codeword sets, and feeds back its serial number and channel signal-to-noise ratio information to the transmitting end.

The construction and selection of codebook is the primary issue of precoding technology. The codebook is a quantization of the optimal precoding matrix. The size of the codebook and the distance between each codeword affect the performance of precoding. Typical codebook construction includes Grassmannian method and orthogonal codeword construction method. The former is based on the decision of the Grassmannian manifold to maximize the Euclidean distance between any two codewords, the latter is constructed using orthogonal matrices, such as FFT, DCT and Harmard matrix. The former is an irregular codeword, and there is interference between the two codewords, while the latter is arbitrary between any two codewords.

3.2 Precoding technology based on SVD decomposition

As MIMO technology matures, multi-user MIMO technology will also be applied to actual wireless communication systems. Typical applications, such as multi-user diversity transmission and multi-user detection for mobile stations with multiple receiving antennas, maximize system throughput. The precoding (beamforming) method selects the user with the highest SNR and minimizes the interference between different users. Compared with a point-to-point system, the base station must not only process the channel information fed back by different mobile stations, but also perform matrix matching on the precoding between different users to obtain the best data transmission.

For the above precoding (beamforming) schemes based on channel information, the optimization criteria for the transmission and reception mechanisms include:

4 Simulation to verify the effect of precoding. We use the ITU channel model (walking A, 3km / h), set the number of transmitting antennas to 2, the number of receiving antennas to 2, the modulation method to 64QAM, and use 1/2 convolutional coding. The correlation coefficients of the transmitting antenna and the receiving antenna are 0.2 and 0 respectively, and the channel is a flat-fading Rayleigh channel model. It is assumed that the channels between the antennas are independent of each other. The packet error rate curve based on STC space-time coding without feedback, SVD precoding feedback and ideal feedback is shown in Fig. 4. It can be seen from the figure that the closed-loop MIMO system is superior to the open-loop system, and the SVD-based AND coding system is superior to the precoding system with a codebook. 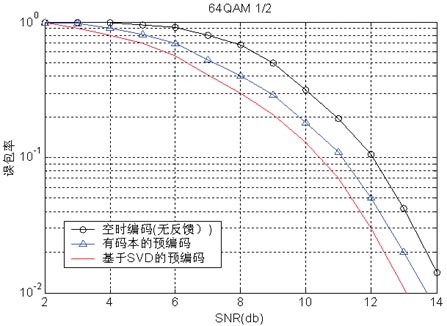 From the above discussion and simulation results, it can be seen that closed-loop MIMO technology is a very promising technology in future mobile communications. As the application of MIMO technology in cellular networks becomes more and more mature, research on MIMO technology has also expanded from a single-user point-to-point environment to a multi-user MIMO system. The closed-loop solution of multi-user MIMO is also one of the research hotspots of 3G LTE and WiMAX systems. The most common solutions include: block diagonalization, successive optimization, beamforming, and combined space-time coding to eliminate interference between multiple users.

For a closed-loop MIMO-OFDM system, if channel information feedback is required for each subcarrier, the feedback link has a large overhead. How to design to reduce the amount of feedback data is also one of the research hotspots in MIMO-OFDM systems.

Portable Heater Fan is ideal for use in an office or a small room. This heater is an automatic thermostat control with four positions for fan only, warm, hot, as well as off. The Heater Fan has a safety switch to shut off when tip over. It also has a thermal cut-off safety, a thermal fuse and a indicator light to let you know when it is working or not. This Fan Heater has two heat settings: 1000 and 2000 watts. When you just want to circulate some air, you can set it to cool fan only. or Keep warm when winter.
Portable Heater Fan, normal specialize as below: