The annual CES exhibition in the United States has gone through a full 50 years since its establishment and has been regarded as a vane of the trend of international electronic products. Many important electronic products have chosen to start at the CES, in order to influence the increase of product attention. Drones became the focus of media attention at CES 2015 and quickly became a new industry.

Although unmanned aerial vehicles at CES this year were no longer the focus of much attention in 2015, they still attracted many domestic drone manufacturers. They have brought their latest products, trying to attract more users' attention. From their participation in the show, they can get a glimpse of the development trend of drones.

Why drone manufacturers cling to the consumer market

Last year, domestic manufacturers billion airlines once took the limelight at their CES with their large drones 184, but this phenomenon is no longer. Almost all exhibitors this year brought mostly miniaturized products, and even professional aerial drones are relatively rare. 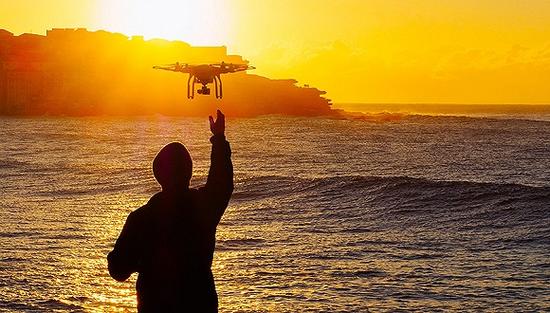 DJI began to promote the new DJI MAVIC Pro, a miniaturized aerial drone with pan-tilt, mainly for the consumer market, and it is also the main force at CES. Zero-scale intelligence continues to push for dobby pocket drones that have been on the market for months, while zero-thousands unlimited brings hover cameras and drones to market later this year. The real CES starter should be Mola's UFO drone. This new "machine" as its name, the main body resembles a flying saucer. The diameter of about 14 centimeters after gathering is similar to the 6S length of the apple. Nearly 300 grams is slightly heavier than the two apples. The whole is equivalent to a large size charging treasure, carrying more convenient, the main is self-timer.

Judging from this year's CES exhibiting events, it shows that major manufacturers are all looking to seek breakthroughs in the consumer drone market.

All along, drones rely on the industrial market for survival. For example, Dajiang is defining its own industry dominance in the field of professional aerial drones. There is no precedent for success in the consumer drone market, but why are many drone manufacturers still clinging to the consumer market? There are two main reasons:

1. Although the industrial market has huge potential and more lucrative profits, the conditions of technology, capital and other requirements are much higher. For example, e-commerce is a market segment that is favored by drone applications, but in reality there are few drone manufacturers that directly enter the market. Basically, e-commerce giants dominate. Because of understanding the specific needs of e-commerce companies, they only knew how much they needed to solve such technical problems as short battery life, more than 7KG unmanned aerial vehicles flying at low altitude, and unmanned aircraft carrying capacity. At present, the UAVâ€™s capital and technical strength are relative. Weak.

Compared with the potential market, the entry threshold for consumer market is much lower. Consumer-class drones on the market are basically the concept of flying cameras without the need to consider more complex mechanical controls. Its main technical difficulty lies in the flight control system, and the technical requirements are not as high as in the industrial market. There are many open source systems available for reference on the market, further reducing the technical threshold.

However, the market for consumer-class drones that manufacturers have entered is not a good situation. On the contrary, the news of many drones' transformation and layoffs made people feel a slight chill.

At CES 2016, Yihang successfully attracted the attention of the global media with its 184 manned drones. Although some people questioned it, it did not affect its winning of the Best Alternative Products Award of CES 2016 and Fast Company's 2016 Best Innovation Company Award. At that time, Airline said that it would be commercially available in 3 to 4 months, but in fact it has been skipping tickets. At the end of last year, the announcement of its B-round financing of 42 million U.S. dollars in just three or four months of airways revealed a massive layoff.

Some analysts believe that the reason for its layoffs is that Airline not only failed to make progress on 184, but also failed to return in the consumer market. According to the Xtecher report, the highest shipments of the early billionaires reached more than 4,000 units in a month and they performed well. But later, product iterations failed to keep up with the pace of the market and were left behind by Dajiang, causing the shipments to plummet. The monthly average monthly shipments in the domestic market are only over 100 units, and it is not surprising that they eventually fall into the financial dilemma.

With the new strategy of dobby pocket drones, zero-degree intelligence has rapidly become the upstart of the drone market, and its market share has once climbed to 20%. However, it was also unable to stop the layoffs. On the last day of 2016, zero intelligence was revealed as a result of surprise layoffs, and as many as 134 were laid off. Although Yang Jianjun, the CEO, explained that the surge in personnel exceeded management capabilities, it was due to tighter funds because marketing sales were less than expected.

The market forecast report of several research institutions believes that the market size of domestic consumer drones will reach 30 billion yuan in the next three years. However, from the current status quo, the consumer drone market may be overestimated. The consumer market is facing three major bottlenecks, making it difficult for the market size to break through in the short term:

First of all, the usage scenarios of consumer-grade drones are too single and not just for the vast majority of consumers. Although drone manufacturers use tourism, sports, and partying as a usage scenario in advertising campaigns, they are in fact limited to outdoor locations. In the daily life of domestic consumers, outdoor is a very few scenes. Coupled with the special nature of drones, some major cities have implemented controls that reduce the use of consumer drones. Even more deadly, these big cities are precisely the most promising regional markets for consumer drones.

Second, prices still fail to truly break through the psychological expectations of users. At present, consumer-grade drones have fallen to less than 3,000 yuan, which is equivalent to the price of a mid-range mobile phone. The surface does not seem high. However, since the use scenario is very limited and the single-use cost appears to be too high, consumers do not consider it worthwhile to spend 3,000 yuan on purchasing drones. The current state of consumer-class drones is similar to the pre-popular stage of smart phones. Excessive prices have hindered the market's popularity.

Again, the consumer experience of current consumer drones is poor. In order to make the size small, consumer-class drones can only sacrifice some of the performance of battery life, stability, etc., in which the battery life is too short for users to be the most dissatisfied. Consumer-class drones usually last around 20-25 minutes, while portable products are as low as 10 minutes or less. For example, the dobby pocket drone has a nominal flight time of 7 minutes, but the actual flight time is only 4 or 5 minutes. According to the scene of the manufacturer, can you imagine that you would have to carry a drone with you when you go out for a run in the morning?

Enershare's commitment to future-ready energy solutions for smart home innovations, Enershare's Energy Storage Systems create a flexible energy maintenance system for homeowners who want to take more control of their home energy use, it is intended to be used for home battery energy storage and stores electricity for solar self-consumption, load shifting, backup power, and off-the-grid use. you can use it anytime you want-at night or during an outage.